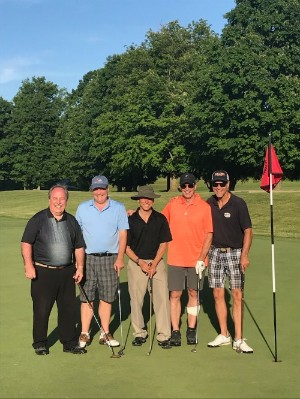 This year the “70’s Guys” got together for their annual Amici Golf Tournament on June 20th at Westview Golf Club.  Attendees were; Bob & Craig Dameron, Tim Stanley, Paul Weale, Joe Bales, Jeff Lloyd, Jamie MacIntosh, Randy Kline, Bill Meeker, Rob Galloway, Ken Clarke, Ray Lyons, Rob McAdam and a surprise last minute appearance by Craig Hannaford.  It was a best ball format with 3 teams competing and after a grueling 18 holes only a single stroke separated first from last.  The best highlight of the day was a 70 yard approach shot by Rob Galloway that bounced up onto the green and rolled sideways, disappearing into the cup for an eagle!  After the golf we all enjoyed dinner and prizes generously donated by the group.  An important part of the day is a $50 donation from each person to Amici.  Including additional donations made by people who couldn’t make the actual event, I’m pleased to announce a total of $1,000 was raised.  Thanks to all for the generous support of Amici and a great day of fun and friendship.  And a special thanks to Tim Stanley, who makes the trip from the west coast every year for this event.